Save Hilary to your Collection. Register Now! 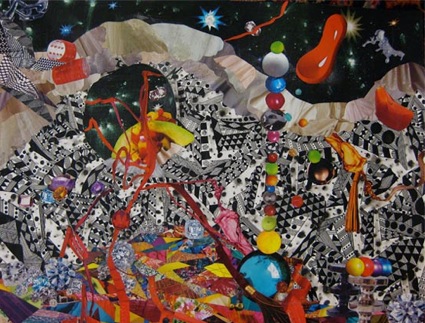 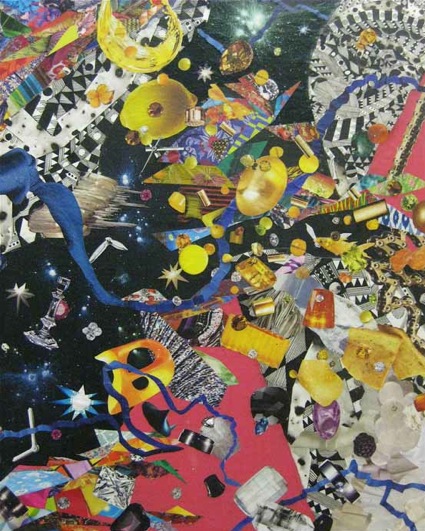 The Law of Accelerating Returns describes the inherent increase in the rate of biological evolution with the ever quickening of technology. Technology is the paradigm shift in human evolution, which will transcend biology, merging the reality we know with artificial intelligence, also known as the Singularity.

My drawings depict the aftermath of a population crash, where remains a fusion between cyber-space and hyper-reality. The abandoned post-apocalyptic landscape in the position of regrowth is hemorrhaging consumer goods from the rock-like skeletal system. Evolution is depicted in the layers of rock, along with the gelatinous collaged pieces used to describe tumors growing exponentially. Patterns, which create order in nature, are also essential for artificial intelligence’s recognition and response.

Images and shards from glossy magazine pages are reassembled to remove the familiar pseudo-event, which took place within advertisements and reposition them into a surrogate image within the drawing. Codes in both the striations of the landmasses as well as the programmed spectacle from the magazine pages narrate the future history. The space that remains is the refuge left behind with the disappearance of the human population. The land is continuously expanding with only the instruction and direction generated from its own design, resulting in a mutated environment. The space I propose is a critique of capitalism’s driving force behind the rate of technological developments and the urging of lifestyles that remains unobtainable, existing just beyond reach.

Show all reactions
"MY REVIEWpic a; eruption of human civilization from the earth to the entire universe"
"Hello, I appreciate the comments, but to be fair, this statement was taken from the internet and written while I was a student and not quite sure of what I was talking about."
"This artist statement conversation sounds really boring to me. If you like the work than you like the work. To Chris "The Teacher". You are a teacher not a working artist, so that says it all right there. Need I say more?"
"Too busy in my opinion. though, I think that's the point."
"What are you people talking about!"
"Nice colorful detail, although too busy for my taste. However, I have to agree with the comments suggesting a major overhaul of the artist statement. From one artist to another, it's great to explain the motivation behind the work, but it's a real turn-off and strikes the reader as very pretentious when the statement is overstuffed and wordy. The art demonstrates your talent and passion; don't try so hard to impress people with phony intellectual mumbo-jumbo, because it really accomplishes just the opposite."
"Love the color in motion. It is a visual pleasure and it drew me in, but the statement...BLAH! That drew me away. Try not to use drugs while writing about your work."
"i would love to see these in person. they remind me of a cross between Bosch and Pollock. one thing i love about Pollock is the depth that is created simply by the application of layers and not by the use of perspective."
"This artist's statement is the reason so many people don't respect artists. The less justifictation for a piece of art the wordier and more convoluted the explanation becomes. As an art teacher I get the same things from some of my high school students, but I am really disappointed when I see it from working artists. It's borderline insulting that you expect people to believe that. Even people who don't know art know BS when they see it. Just save the long-winded description next time and say, "I make pretty collages.""
"Un pastrocchio di colori senza senso.dario Ciccal" 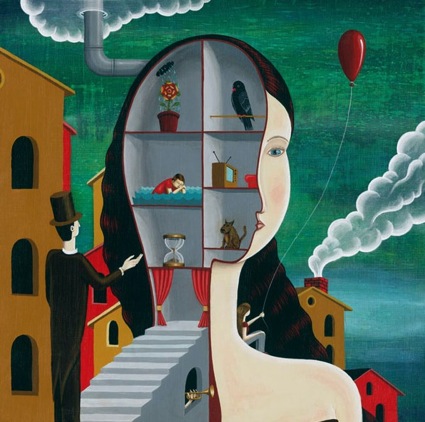 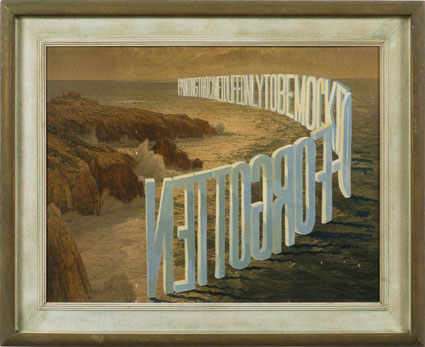