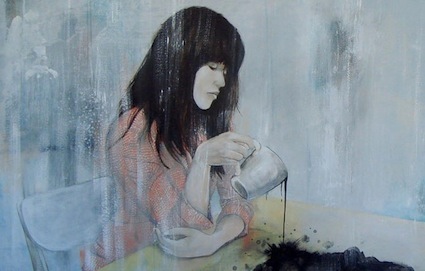 Born on a chicken farm in Hebron, Maryland, Jeremy has migrated between Alaska, California and Florida. He began creating skate videos and short films when he was just eight. A self-taught artist, Jeremy has shown his work in Los Angeles, San Francisco, Washington D.C., Barcelona, and London. Jeremy now resides in Huntington Beach,…

"both girls seem liek they are off in thier own little world. I wish i could be like that"

"My children eat small animals every day. Bunch of wet blankets. JAL drinks lots of coffee, and it gets spilled all over his paintings. In the words of Comic Book Guy - "Best.....artist........EVER""

"The series I did in the past with the children eating the animals was called "Acquired Taste" It was a series about growing up poor, surviving, and having to deal with what you got in front of you. "

"sweeeeeet love the first one"

1 other artists from Huntington Beach, CA