Teiji Hayama is a Japanese painter. He is known for his supernaturalism elongated, milk- skinned nymphs paintings. Hayama was born in Japan in the island of Kyushu, he grew up in Kumamoto in a large family of artists. Ancient and modern, traditional and eccentric, simply and extraordinarily contradictory, immersed in a Shinto environment and studying in a Protestant Christian school, influenced Hayama’s artistic expression. After high school, Teiji Hayama moved to London where he studied art and fashion. He also did some fashion modeling and appeared in international magazines like Vogue Magazine shot by Glen Luchford, Wallpaper, THE FACE and Ray Gun. Hayama currently lives in Switzerland and has exhibited his work regularly in galleries throughout the world.

Teiji explains the work by saying, “The works depict young girls evolving into women. They represent messengers whose glassy, ambiguous gazes remind the viewer of the importance of life. The portraits are pure and uncovered. Nudity is not nakedness, but a form of innocence – one and unique entity showing the purest essence of the human being. Thin and long limbs of depicted girls contrast strongly with their musculature. Their bodies are atypical, blending both fragility and strength, and therefore expressing their desire to keep going. Pale, or at times even livid skin, resembles ancient beauty, but at the same time clashes with the girls’ juvenile and well rounded cheeks.”

"She has a big brain and thinks alot. Sad a bit angry eyes LIke this.. Red hair shows goes after what she wants and needs"
"Attention grabbing!"
"Pop surrealist dreamcicle"
"good use of color"
"She is so cute, but either sad or pissed off looking"
"What unusual work!"
"I really like this :)" 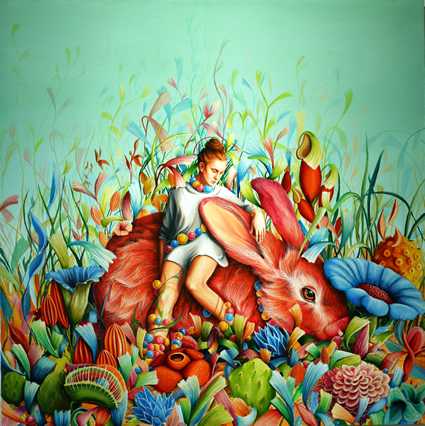 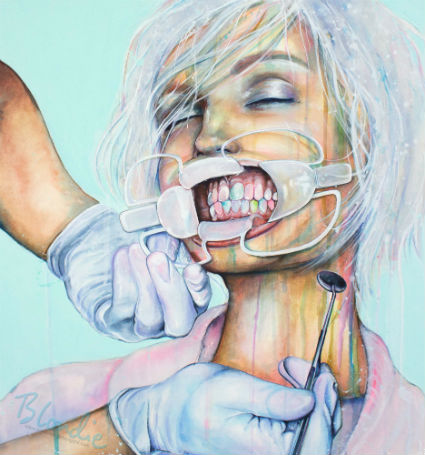