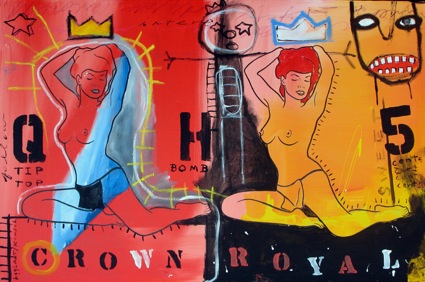 Jeff Hughart is a self-described 'outsider artist" who creates boldly expressive abstract paintings in his basement Bonnerport Building studio in Bonner's Ferry. He also has several paintings on display for sale at the Groove Studio, an artist-run cooperative gallery owned by Carolyn Testa. There is an unmistakable raw edginess in Jeff's creations, works…

"There is a very strong similarity between your paintings and Jean-Michael Besquait."

"It's art people. Either you like it or you don't. If you like, it say so. If you don't, say so. But stop fooling yourselves into thinking there is a right or wrong way to do it."

"I love these two, but I've seen Jeff's other work displayed in the Groove Studio in Bonners Ferry, ID, as well as through his web site at jeffhughart.com, and there are lots of others that far outweig"