Save Jing to your Collection. Register Now!

'In the Museum'
Oil on Canvas

Jing Qin is an artist living and working in Knoxville, TN. She was born and grew up in Henan province, China. She earned her BFA and MA with honors at Sichuan University, Chengdu, China. She is currently painting, drawing and exhibiting in the USA.

Jing Qin’s works are frequently figurative images which are depicted against backdrops of obscure interiors. While she develops each work instinctively, without knowing the finished result, each painting has a strong sense of narrative. She deliberately build a antagonistic narration by mixing elements from her fantasies with a commonplace of mundane world.

Jing explains the work by saying, “The truth may reside behind absurdity. Fantasy may come from reality. Surrealism is more real than realism. My works do not come from my personal experience and surroundings alone but exist as a hybridization of Chinese scenarios and American daydreams. Though I am aware of being both the narrator and creator of my paintings, the narratives remain undefined. Instead, they are generated by my unconscious, then developed and formed by the experience of viewers. I set my characters in a flatness that I call a non-logical space. The ambiguity of their gender and skin tones make them abnormal, even uncanny. They seemingly engage in meaningless tasks while holding ordinary poses, blending the odd with the ordinary. This ambiguity comes from the supernatural being presented as the mundane, and vice versa. I’m interested in prompting viewers to call into question the limits of narration, making psychological realism and surreal flights of fancy indistinguishable.” 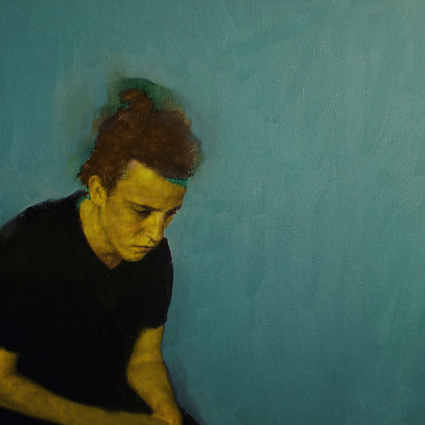 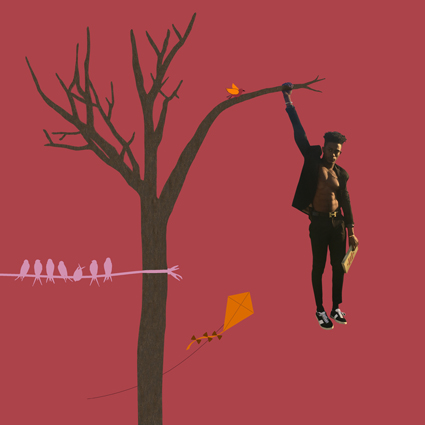