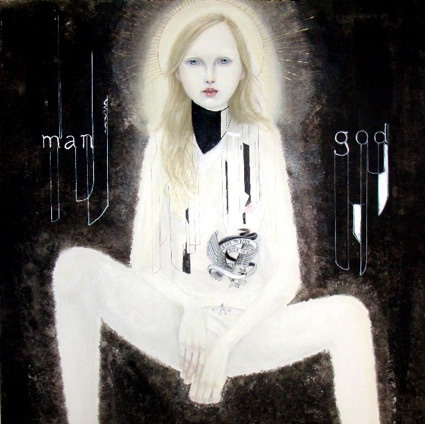 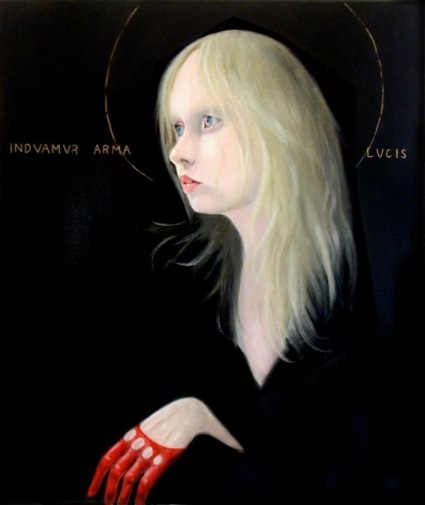 Many of the figures are rife with symbolism, a tradition in Christian art.

Hayama’s pale, ethereal figures with frail bodies and pale tinited eyes often inspired by well-known images of female deities, portray an angelic appearance which clashes with a penetrating and unnerving glare directed at the viewer. Symbols of religious and spiritual devotion, pledges of love, tattoos depicted in the portraits represent the seat of emotions of the young girls, their convictions, belonging or identification with particular groups.

Teiji Hayama communicates the innocence of children by portraying nude girls. Nudity combined with innocence and vulnerability is often depicted in Japanese pop art. Hayama also wants to show the transition from childhood to adolescence, a physical and mental transitional stage involving social and psychological changes.

Show all reactions
"These two paintings are gently and beautifully sacrilegious.......i like it! ,not that i hate religion. Its the modern like twist using the old christian art style of paintings thats really cool. Its different and smart, :D)."
"I'm always glad to see artists includespirituality in their work. Some may see this work as narcissistic, but I think it's a bold expression of herself. She is seeking, perhaps in all the wrong places, but she makes the search provocative and interesting."
"Skinny blond? As a skinny blond I take offense to that. Two entirely different emotions being conveyed in these two paintings. When did all the hating on blonds and skinny people start? Some people happen to just naturally look like that. Especially in Northern European countries. So bite me. I love this work."
"Remember, back in the late sixties, the posters of the starving puppy dogs with huge tear filled eyes, shivering by the fencepost with the ominous storm clouds in the background? The artist made his fortune (and a big one it was) doing that same subject over and over and over. Oh, sometimes, it was a kitty and the fur colors changed and the background varied a little, but it was the same emotion in every dang picture.Skinny blonde with pasty skin and huge eyes. Shoot me now..."
"amazing"
"vivid very vivid and very creative"
"Yeah, I couldn't tell if I liked her art or not. (I did check out her website) - very beautiful but some aspects were just too intense for me. I can see a lot of people who can relate; just not for me."
"wow a little creepy but beautiful."
"impeckable the comparison between God and man is so out spoken and important. This is an amazing point of view."
"breathtaking and beatiful the comparison and contrast between God and man is impeckable and out spoken." 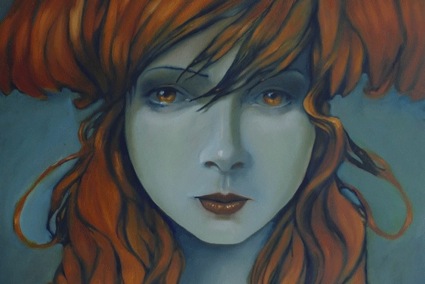 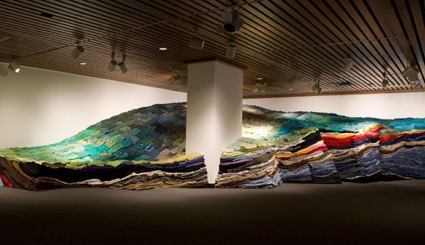