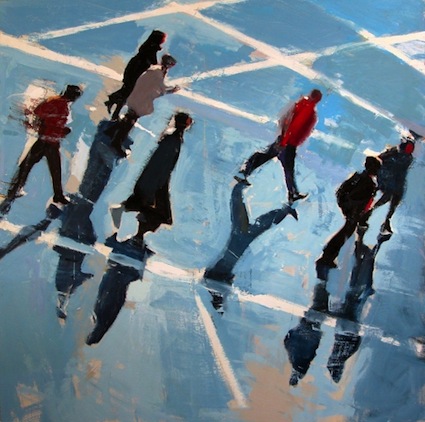 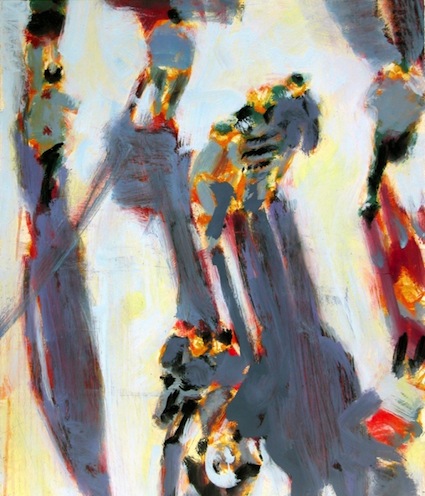 David Kapp’s paintings continue to reflect a strong interest in the urban landscape. His subject is no longer limited to automobile traffic and birds-eye views of streets and buildings. He has added paintings of crowds and the human figure in motion.

Using his body as a tool, measure, and filter, Kapp paints the forms of movement found in the urban landscape. The cityscape here as subject matter is a pretext. Through response to and representation of his immediate environment, Kapp treats his body as a filter, allowing the patterns, speeds, and spatial relationships of New York City to seep through his body and onto the painted surface. Rather than investigating the psychology or personal narrative of the city life, Kapp’s use of cityscape exemplifies a key property of all scenes, environments, and societies: the accidental, incongruent, and yet harmonious relationships of movement. Kapp’s subject matter acts as a metaphor for painting itself. One brush stroke that marks a car literally renders the car’s form as a moving force. It also draws attention to the artist’s speed and motion in the act of painting. Kapp’s work is grounded in his process, each painting a finished image and record of its own making.

"Refreshing.......I really like your technic..It brings a good feeling.......Chimmi"
"Very nice. I really like your style. Thanks for sharing."
"Brilliant composition, especially in the top piece: the parallel lines of the people walking playing against the parallel lines in the sidewalk--but both at a tilt. It makes what could be a static scene much more interesting. Thank you, Mr. Kapp, for not being afraid to take chances with your composition! Lively but decisive brushwork, as well."
"Beautiful colors and sense of action."
"i like the way you paint."
"This is REALLY good. I love how when I first looked at it, it just looked like random lines, but it turned out to be a scene. I love the wet street in the first one and the light in the second one."
"I find this work AMAZING!! That he can create a moving car with a simple brush stroke... and have it *look* like a moving car is remarkable. The crowds are my favorite..."
"I love the way you paint. I think this artist must like Diebenkorn as much as I do!"
"I really like these, they way they capture movement and purpose" 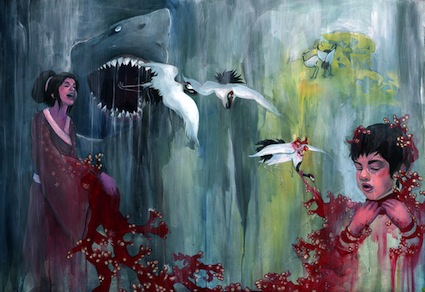 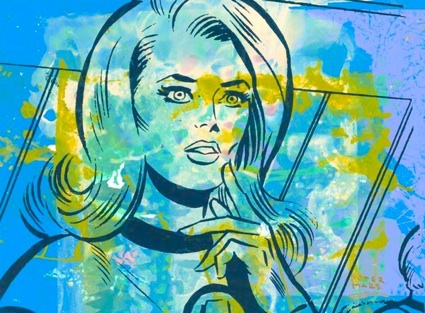