From early on there really wasn’t any doubt that a career in art was the direction I was headed. I was hardly interested in anything else and a lion’s share of my childhood was spent with my head in the clouds, doodling a veritable army of dinosaurs, space ships, demons and imps. Even much of my later schooling was spent failing other useful but mundane subjects like chemistry, math and english while art was the one area that I excelled at. College was hardly different, I spent six years finding myself and taking a lot of classes before graduating with a BFA. Documented and dedicated to my chosen profession I set out to make my veritable mark on the world.

Since then I’ve held all sorts of jobs, from graphic designer to 3D modeler, photo-retoucher to illustrator. I’ve studied, learned, grown and spent a lot of time as a professional artist making a decent living doing art, but in all that time and through all those jobs I’ve learned one all important thing. It was the time I spent, like the kid at the kitchen table, creating art for no other reason than sheer wonder of it all, that I was happiest. No matter the piece or the end result it’s the art that we do for ourselves that wholly reflects us as people. It is that art which is purest, it is that art which holds the most magic, it is that art which connects on the deepest level and it is that art that this site is all about.

So, on that note, take a look around, see what I have to offer and hopefully something in here pops, something connects you to that little boy, drawing spaceships and dinosaurs, and leaves you with a sense of wonder all your own.

Show all reactions
"thats what im talkin about. KILL EGO"
"There are very few creative and inspiring pieces of work that bring the mind into a distant awe filled land and into the very depths of creativity like yours has done. I particularly like the shading in the robots armoured suit along with the extranuous detail which follows. I felt compelled to compliment you as I am a fellow artist but also because I have discovered that I can relate to you in several ways, after having read the short summary of your life. Thank you for displaying your art and the best of luck to you as you continue on in your artistic career."
"This is Very Creative & Unique iLove Eht."
"beautiful"
"[...] Visto en ArtistADay. [...]"
"The Freudian sexual tension within the work, i.e. phallic shaped robots (one playing catch with his neutered remnants, the other with an arrow pointing to a screw that acts as a sideways vagina) placed against the phallic symbols of skyscrapers and telephone polls. Yet the aspect of the marching robots, the drabness of the color schemes, and the gloomy industrial surroundings create a detached and eery sensation that leads one to question - particular when combined with the incongruity of artist's personal account - what it that is actually being depicted as being repressed in these paintings."
"these painting are so cool....theyr'e the backround on ly laptop"
"Thank you for continuing your art and sharing it here. It is refreshing to see what imagination you have. Doing paintings like this takes incredible work and patience. You have my admiration."
"These are cool they remind me of one episode on sponge bob were plankton steals the crown and all that dadado. Well any ways these are FANTASTIC paintings i see that you really tried to express yourself and took time into these!!!!"
"Love these paintings, inventive & interesting!" 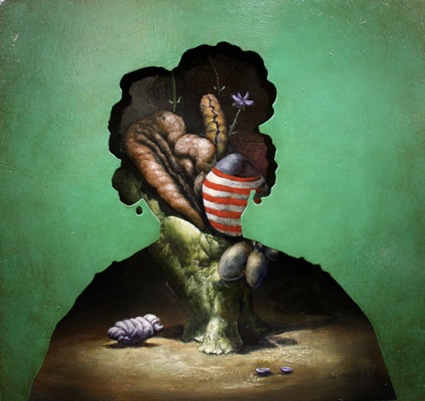 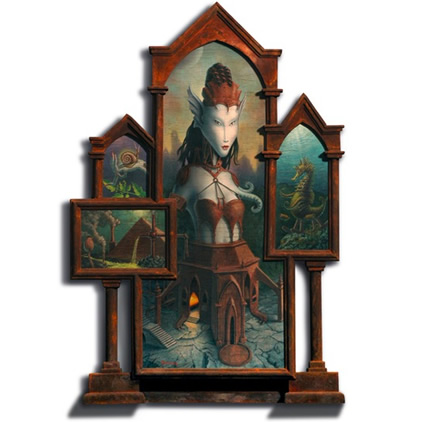