Save Bruno (9li) to your Collection. Register Now! 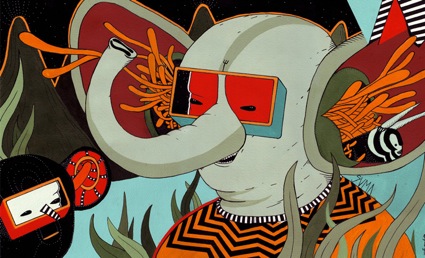 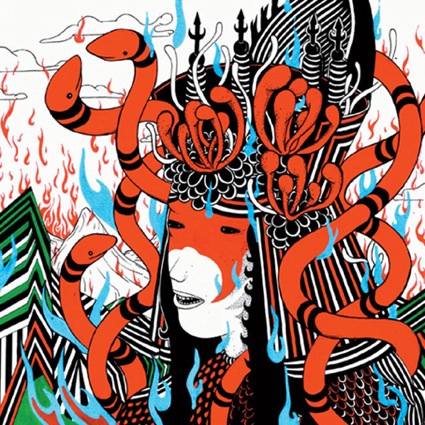 Mythological, spiritual, pantheistic: the first adjectives to define Bruno 9li’s metaphysical world, one of the most interesting emerging artist within Brazilian artistic panorama. 9li (pseudonym/abbreviation of Bruno Novelli,1980) synthesizes within his artistic production several dichotomies and contradictions of the Brazilian world: metropolitan, ephemeral and technological.

In his works, animals seem to spring out the diaries and bestiaries of the first European explorers of the “New World” and epic heroes strongly impose themselves to the spectator’s attention. A return to origins, a lost golden age, permeate of symbolism where you can clearly notice references of pop culture, comics and science fiction films.

With his frenetic and saturated line, Bruno 9li draws a chaotically ordered world, ruled by a mysterious alchemy that controls, between past and future, death and resurrection, fantastic metamorphosis and genetic mutations of beasts and paladins into demigods and androids.

In spite of his young age, Bruno 9li has been recognized by his work at the international level with solo exhibitions in Europe, North America and the Far East.

"Great art keep it up"
"Bruno I like the colors of the art so vivid and bright. Elephant is awesome!"
"Glad to find some fellow Bruno fans here- we were lucky enough to have Bruno 9li and his very talented girlfriend Talita Hoffmann (keep an eye on her, she is going to be big) over to London last week for their first UK exhibition. We were totally blown away by their work- anybody who would like to check out their most recent stuff should email info@lavacollective for some pics, also we will have limited edition prints and T shirts on our store soon http://www.lavacollective.com/store.html"
"Glad to see that he's starting to emerge all the way from south america. his intricate details are amazing!"
"yes, i l like your mural very much,but does it represent some spiritual figure or has it a spiritual meanning with all the serpents"
"Bruno is an incredible artist with a great career ahead of him!"
"Glad for the chance to see 9li's work."
"As lovely and fascinating as they are, they never rise above illustrations of a personal world. They are dynamic and bright but one sees faults throughout with each image.Nonethelesss, he has achieved a lot in the last year with publications, and I would be interested in getting a copy of ROJO if the website had given me instructions on how to buy it."
"I like your elephant you made him look alive and spectacular and amazing keep up the good work..."
"i would love to see these live. the colors used and the visual movement is awesome"