Save Richard to your Collection. Register Now! 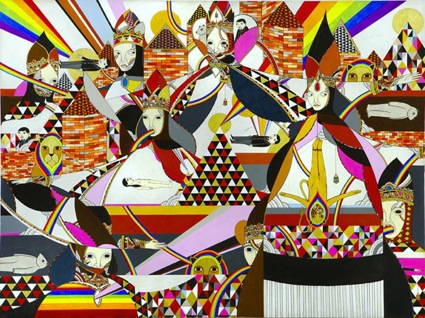 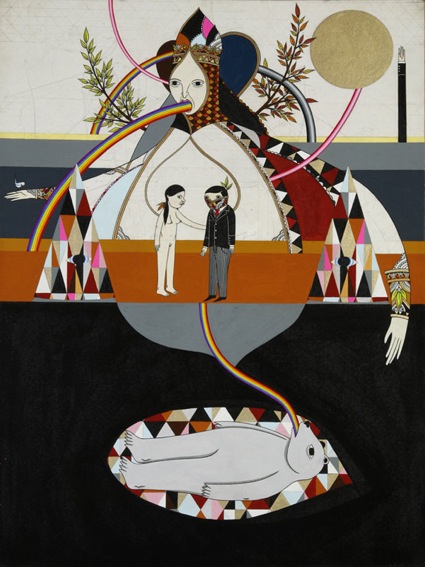 Richard Colman was born in 1976 and grew up in leafy Bethesda, Maryland, a suburb of Washington, D.C. His childhood home looks a little bit like the terracotta brick houses in his more elaborate paintings, but the similarity is just a structural one; presumably, there wasn’t nearly as much sodomy and decapitation in his real home. Bethesda was a well-heeled place full of powerful people, but Richard spent much of his teenage years venturing into D.C. exploring, painting walls, and going to hardcore shows. Richard loved the presentable part of the city: the free museums, the monuments, and the energy of the locus of political power. But just as much, he became fascinated with the other D.C., a place that had nothing to do with government and would never draw tourists. Just as his paintings of houses look a little like his own, there was plenty to D.C. that lay under the surface.

Richard’s background in graffiti, while stylistically nearly irrelevant in terms of his art, is the kind of background that changes one’s perceptions of what is permanent and precious. Graffiti has every right to embrace vulnerability. Paint outdoors and you know full well your art will die, maybe before you can catch a photo in daylight, maybe in a few months, and definitely within a decade or two. Stylistically, though, graffiti is all cocksure attitude, bristling edges, and menace – strange for a medium so utterly fragile. Anyone with hundreds of graffiti paintings under their belt knows the strange feeling when they shift to fine art: it just feels weird knowing the work isn’t destined to die. Richard’s artwork isn’t going anywhere, with its nice archival paper and glass, but he’s imbued it with that vulnerability of impermanence.

In 1998, Richard left the D.C. area for Boston’s School of the Museum of Fine Arts, earning his degree in 2002. While learning the techniques that art schools like to force upon their students, he developed an appreciation for Renaissance-style portraiture as well as his fellow students

"I have been a big fan of Richard's work for a long time now. I have seen him go really big in regards to scale, or create really small, more intimate works, which are all equally successful. His use of color is fantastic and I really enjoy his "dirty" work as well. You know that every time he creates a body of work, there will be something new to it. Richard is constantly reinventing himself and I look forward to seeing what he comes up with next."

"I love Richards work. I love his perspective, and what I get out of his art. I love his colors and color schemes that he uses. I love the scenes of every day life and the details that are entailed through out his art. It is through his work that he has created a world of rich characters. Vibrant colors, but also dusty. I love that I can see what he has done, in the details, brush strokes and the likes. I could gush on, but, I just love his art."
"Beautiful and complex, but I find it desterbing."
"The uppermost image reminds me of some of Dalek's work..."
"Really like the work, thumbs up."
"very cool! love his work! reminds me a little of Dali, with his use of abstract almost psychedelic images and forms."
"Omg!!! This is so cool. I really don't understand it but it looks cool!"
"I love this guy!!"
"I do not understand what these paintings mean to me, but I do know that they are beautiful. I look forward to seeing more of your art!"
"illustrations from a personal mythology. The artist is tremendously energetic and successful and is entering and showing like crazy."
"very interesting creative art in a moding way" 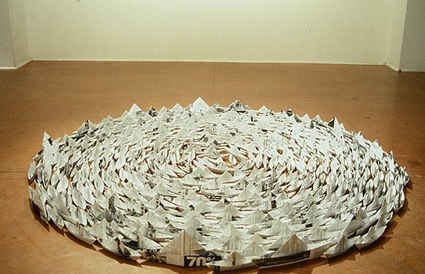