Save Zac to your Collection. Register Now!

'Garrett'
Assemblage on board

'Ryan'
Assemblage on board

He explains his work by saying, “My work focuses primarily on portraits created by assembling found objects, disposable goods, and the leftover trash of things we consume in our society. I glue the bits of junk to a wooden substrate, a canvas, which forms the image of a portrait. The result is a stunningly realistic portrait at a distance and an interesting array of objects up close.

It is very important to me that I incorporate the actual objects into the art as opposed to a picture or rendition of it because it better expresses the intention of the artwork. I feel the junk is more powerful being present. It is an actual thing to be reckoned with that existed in this time and place and carries energy in and of itself. The result is a time capsule of objects that reflects our culture.

My assemblage artworks have continued to encapsulate cultural change. For example, grey film canister tops used in my early junk portraits are very rare now as our society has moved to digital cameras. An iPhone used as shading on a cheek looks desired one year and archaic the next as society, technology, and consumables continue to change.”

Great work. Could I be notified of his shows? What pieces are for sale?

question: do the spaces between interest you or drive you crazy?

I absolutely love it! terrific work.

good for the eyes to see

woah. How big is it? 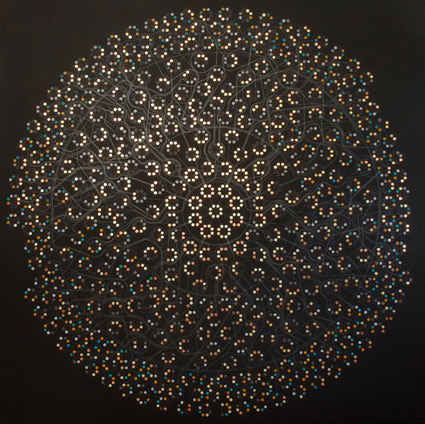